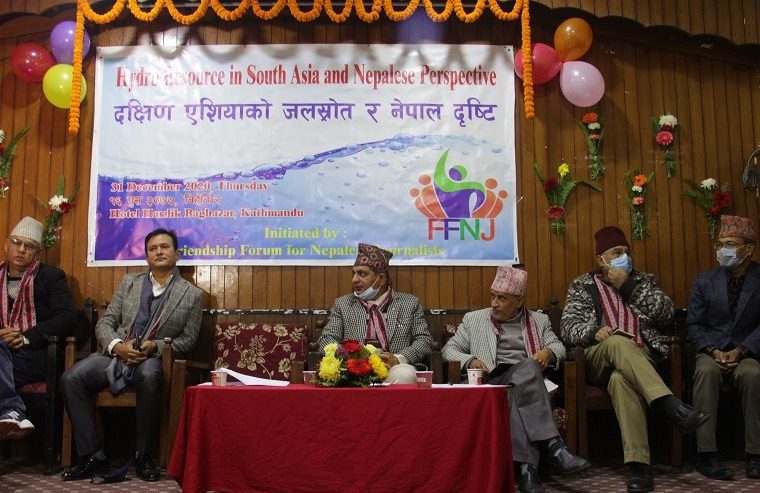 Kathmandu: Experts have urged to utilize the water resources in Nepal extensively. They also suggested being clear on the potentiality of water resources and perception of Nepal government on water issues. Participants and experts from various sectors, in an interaction program on Water Resources in South Asia and Nepal Perspective held in Kathmandu organized by Friendship Forum for Nepalese Journalists Thursday, highlighted the need of explaining the real situation of energy in Nepal to the Nepali people.

Bharat Bahadur Shahi, Water resource experts said,’ Extensive discussion is needed on the use of water resources in Nepal as soon as possible.’ According to him the government should place special emphasis on projects that can be operated with its own investment. The Upper Karnali Hydropower Project of a similar nature has been in a coma for the past 13 years. It is also the cheapest project in the world in terms of investment. The government does not seem to want to move ahead with this 4180 MW project, he added. Shahi complained that they had met many prime ministers and ministers in course of pushing this project forward but none of them took this seriously.

A group of people has been engaging in the Upper Karnali Rescue Campaign. Neighbors are keeping an eye on Nepal’s water resources. The Upper Karnali , which can be operated with internal investment, has given to an Indian company GRM. ‘Nepali water is considered to be the best in the world for drinking water, so there is a need for a broad discussion on the multifaceted use of water resource’, he noted.

Shahi opposed the MCC project by saying that it was not for the development of Nepal. As per his analysis through the MCC project, the United States planed to enter Nepal easily and want to study areas of strategic importance to Nepal. The Tibet Act, which is recently ratified by the United States, follows a similar strategy. Since it is not possible to directly control Tibet’s vast water resources and various natural resources, it has sometimes raised the issue of China’s human rights and in the name of support to Tibetan refugees the US raising various issues. Shahi said, ‘The US has adopted a strategy of weakening China through Nepal’s land. China’s economic growth rate has surpassed that of the United States. The US has a strategy of using Nepal’s land to weaken China’s power and influence in the world.’ According to experts as it is not possible to directly control the waters in South Asia, the United States has been pursuing various strategies in alliance with its allies. Through that, US is trying to maintain its dominance over the water resources of the region. The route of the transmission line to be built by MCC is going through the areas of strategic importance of Nepal. America’s intention is clear. Now, some Indian companies are also capturing Nepal’s rivers. The Upper Karnali Accord is an example of that. Shahi said,’India is more in favor of not allowing others to enter Nepal than producing hydropower.’

Speaking at the interaction program Ganesh Karki, Executive Director of Singati Hydropower and also Vice President of IPPAN (Indepandent Power Producers Association of Nepal) highlighted the need to explain the real situation of energy in Nepal to the Nepali people. The next battle in the world will be about water. There is shortage of drinking water even in India, Pakistan, Bangladesh, Bhutan and other countries. He said, ‘we have not been able to bring the water of the mountains to the Terai. The slogan of prosperous Nepal is possible only through the use of water resources. India has generated more than 300,000 MW and Bhutan more than 3,000 MW. Nepal has so far generated only 1400 MW. Even the electricity generated by the private sector could not be distributed due to lack of transmission line. Bangladesh wants to buy electricity from Nepal.’

But Nepal is not ready for that. Nepal is still importing 600 MW of electricity from India to meet the demand. Nepal is generating a large amount of electricity in a short time. The government should take initiative to increase domestic consumption. Don’t rely on exports. ‘Cooking induction is 40 percent cheaper than gas. Emphasis should also be placed on the use of electric vehicles’. He added.

Karki claimed that US has been focusing on Tibet for water resources rather than other areas. Not only that, the battle of world may be over water. There can be big politics about water. Speakin of South Asia, India is in dire need of water. India is looking for and managing water resources. Pakistan has been collecting water for a long time. Bangladesh is facing water shortage during the dry season. However, Nepal is rich in water resources. That is why many countries have their eyes on Nepal’s water. Hydropower is green energy. China now says it will bring carbon consumption to a level in five years. China is working to protect the environment. India is under pressure to reduce pollution. According to Karki there is also a dispute over the border river between India and Nepal. That’s not a good thing. This issue should be addressed in time.

Madhusudan Adhikari, Secretary at the Ministry Water Resources and Irrigations has said that water was a multipurpose resource; therefore, it should be used with equal importance for energy, irrigation and drinking water. Not only electricity but also its utilization policy should be formulated on the basis of totality. For this, the government has recently introduced an integrated water resources policy. In this, special emphasis has been given to the use and priority of water resources according to the federal system. Along with the use of water resources, special attention must be paid to disaster control. Different countries are interested in water resources because it is natural resources

He said, ‘Nepal must ensure that there is no inter-regional conflict over water resources’. Not only one country but others are also interested in water resources. According to him argue is that everyone should have the right to consume natural resources. The Nepal government has already drafted the Integrated Water Resources Act. This act will be important for the use and regulation of water resources in Nepal.

Ratan Bhandari, Water Resources expert has criticized ambiguity on the government’s policies especially on ifference between water resources and hydropower. We have not been able to focus on the multi-utility of water. In order to develop the country, priority should be given to the development of drinking water, irrigation and only then hydropower. But in Nepal, the emphasis is on hydropower only. The country side still lacks drinking water, irrigation and electricity. We talk about selling electricity in India but do not pay attention to electrification in villages. Not even by comparison with Bhuta. India  has been giving concessional loan to Bhutan to generate hydro electricity. Nepal needs an internal policy on electricity consumption. The electricity generated in Karnali should be exported only after it is consumed locally. India has cheated Nepal in the Mahakali Treaty and Pancheshwor project. In fact, Mahakali is a treasonous treaty.

‘Tibet’s water resources also need to be discussed here, he said,’ Meanwhile, Indians are exploring Tibet’s water resources.’ There is a writer from India named Brahma Chellaney. He has written a book, Water: Asia’s New Battleground. This book is very biased. The book links the resources of water in Tibet to the interests of the West. He is forcefully trying to promote the interests and influence in Tibet by his book. ‘The author focused on the waters of Tibet and seeks to assert the rights of others over the waters of Tibet’, He added.

Leelamani Paudyal, former chief secretary of Nepal government and former Nepali Ambassador to China said, ‘Nepal has a tendency to give its resources to others and use them by asking for them’. We have also included the point of hurting Nepal while constructing several projects and entering into agreements with construction companies. The United States recently passed the Tibet Bill. According to him Tibet is not only Nepal’s neighbor but also many Tibetan refugees are living in Nepal so we should pay attention towards the Bill. Paudyal claimed that United States  has seemed to have brought this Act to create animosity with China. According to international treaties and agreements, it is not appropriate to bring such an Act. There may be tensions between the US and China, but China is our friendly neighbor. The United States does not have the right to conduct anti-China activities from Nepal. Tibet, on the other hand, is China’s internal affair. Don’t speak in this case without understanding. Afghanistan and Iraq are examples of what happens when they work without understanding.

The purpose of the Tibet Bill recently passed by the United States is to conduct anti-China activities in Nepal. Therefore, it is important for the media to be vigilant. Media should be aware on national issues. Nepali land should not be allowed to be used for any anti-allied activities. Secretary Paudyal further added that hydropower should be generated with the cheapest possible investment. No power is better than expensive power. The government is going to build Budhi Gandaki with a grant of Rs 98 billion. It should not be done.

The chief guest of the program Deepak Gyawali, former Energy Minister has suggested to the Nepal government to end the confusion about capacity of water resources in Nepal. It is just an illusion that Nepal becomes rich by exporting electricity. ‘India does not support for the development of water resources. His desire is to use Nepal’s water as much as possible rather than support for hydro development in Nepal. India wants to use Nepal’s water for irrigation in Uttar Pradesh rather than electricity, he added.  India’s policy has not changed since it became British India. This is India’s strategy. It is India’s policy to make the use Nepal’s river water as much as possible. India sells electricity to us in higher prices. But we have been selling in cheaper price to India.

MCC is not a project brought for Nepal. This is just a project to build infrastructure to export Nepal’s electricity to India. At present, the share of government, private and imported electricity in Nepal is equal to 33\33\33 percent. We do not build infrastructure to distribute electricity produced by Nepalis but we are ready to import it from India. In the name of energy development, the US should not be allowed to carry out activities against China in Nepal. The recently ratified Tibet Act for the assistance of Tibetan refugees and MCC has been brought to Nepal to be used against next country. The US project is not in Nepal’s interest. This is for their own benefit. MCC is a project brought to bring Nepal’s electricity to India, not for Nepalese.

About 50 percent of the countries have rejected the MCC. MCC is not in Nepal’s interest. This is just a game to drown Nepal Electricity Authority. It is said to give 500 million dollars. It is not a big amount at present context. This amount is collected in 5 years by levying tax of Rs 5 per liter on fuel for the construction of Budhi Gandaki project. Why take MCC after losing self-esteem? Nepal’s energy policy is excellent but implementation is weak. He said,’ the government has been giving hydropower projects to foreigners against the law. Government control over water resources is necessary. The private sector alone should not have the right to natural resources.’

Water resources experts, former minister, high-level government officials, social activists and journalists from different media were present at the function. It was on of the remarkable programs on such issues after the impact of Covid -19.

Nepal’s GDP is expected to grow by 3.1 percent